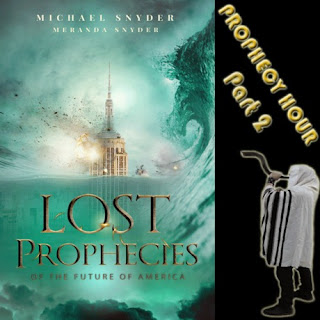 Buy Lost Prophecies of the Future of America at the below link
https://www.amazon.com/Prophecies-Future-America-Michael-Snyder/dp/B08DBNHDJS
For decades, people all over the world have been having supernatural experiences in which God has shown them the future of America. These prophecies are incredibly detailed, they are remarkably consistent, and some of them have already started to come to pass.

Some of the topics covered include coronavirus and the coming pandemics, economic collapse and famine, civil unrest and martial law, the coming New Madrid earthquake, west coast seismic events, dreams and visions of a massive east coast tsunami, and World War III.

The most difficult period of time in all of U.S. history is ahead, and most Americans are completely and utterly unprepared for the "perfect storm" that is now upon us.

This book will shake many readers to the core, but it is also a book of hope.

Even in the midst of all the chaos and darkness, God will be doing something really big. He knew about everything that would happen in advance, He is in control, and He has a plan.

We will be the generation that witnesses the greatest move of God and the greatest harvest of souls in the history of the world, and God specifically placed you at this moment in history for a reason.

This book will be one of the scariest things you ever read, but it will also be one of the most encouraging because it will inspire you to surrender to God's plan and to become the person that you were created to be.

Another do not Miss End-Time Radio program as "We are Warning the World as it HAPPENS!"
Please visit
www.prophecyhour.com
Also
http://wichitahomeless.com/
Also
https://www.facebook.com/WichitaMissionChurch/
"Remember we do not 100% agree with everything our guests, say, do, or believe. It's up to you to pray and sort it out!"