Rabbi Kaduri, Barry Chamish, Chris Putnam, and the granting the UN political control of the Old City of Jerusalem 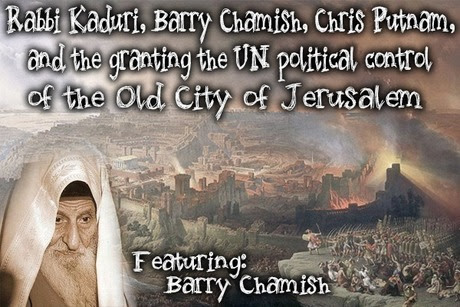 Did Rabbi Kaduri really say Yeshua was the Messiah? There seems to be a different take on what is claimed he said.
Before his death, Kaduri had said that he expected the Jewish Messiah to arrive soon, and that he had met him a year earlier.
It has been alleged that he left a hand-written note to his followers and they were reportedly instructed to only open the note after Rabbi Kaduri had been dead for one year.
After this time period had passed, the note was opened by these followers and was found to read, "ירים העם ויוכיח שדברו ותורתו עומדים" (translated as "he will raise the people and confirm that his word and law are standing"), which by acronym, suggested the name "Yehoshua." (this is what the debate is about a must hear program)

Barry Chamish is an author and world-class investigative journalist. He first gained worldwide notoriety with his coverage of the Yitzhak Rabin assassination and the conspiracy he helped to later uncover.
His book, the bestselling Who Murdered Yitzhak Rabin? is an expose which demonstrates clearly that Mr. Amir did not shoot Rabin. His work on this case compares favorably to the research done on the Kennedy Assassination.

Barry we should also note is not a believer in Yeshua, he a Jew concerned with family in Israel....THIS is a MUST HEAR PROGRAM, make sure you hear all of it.

"Remember we do not 100% agree with everything our guests, say, do, or believe.
It is up to you to pray and sort it out!"
Another do not Miss End-Time Radio program as
"We are Warning the World as it HAPPENS!"
Please visit
www.prophecyhour.com